$3,750,000 settlement for a five-year old boy who suffered brain damage when his cardiac surgeon negligently cut through his aorta, and he nearly bled to death.

$1,044,243 recovery for a 55 year old man who suffered brain damage when his brain infection went undiagnosed for a year.

$1,064,080 arbitration award for the widow and child of a 43-year old man who died because his heart condition was not properly treated by his Kaiser physicians.

$1,250,000 settlement for a 47-year old woman who suffered brain damage when sent home from the ER without proper treatment.

$1,140,000 jury verdict for a leg amputation because of misdiagnosed arterial blockage

$1,116,000 settlement for a brain injury to 55-year-old caused by oxygen deprivation during surgery

$1,100,000 arbitration award for the cost of raising a disabled, unplanned child due to negligence of Kaiser

$510,000 settlement for an insurance company's wrongful denial of disability benefits to disabled surgeon

Bedsores: We have successfully obtained compensation for our clients in many cases where they suffered serious bedsores because the nurses failed to regularly re-position them.

Death: The nursing home patient died because she did not receive adequate nutrition and water, which caused urinary tract infection, malnutrition, contractures, dehydration, and kidney failure.

Broken Hip: An elderly woman suffered a broken hip when she fell from an unsecured wheelchair in a nursing home.

Paraplegia: A 68-year old man who was in a nursing home for rehabilitation after a spinal surgery became a paraplegic because the nurses failed to protect his neck. 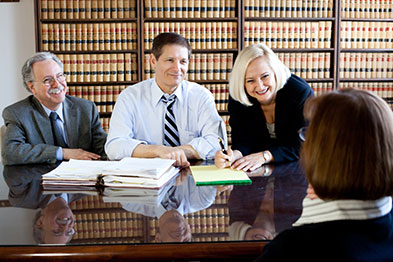 $2,187,600 jury verdict for a woman whose Workers Compensation lawyers failed to recognize that her lung disease entitled her to sue the manufacturer of chemicals she was exposed to on the job.

$807,500 settlement for negligent bankruptcy advice that resulted in client's loss of assets

$725,000 settlement after attorneys negligently drafted a complaint that resulted in the dismissal of death case

$1,325,000 jury verdict to compensate an employee for the amputation of two fingers caused by his employer's removal of the guard on power press