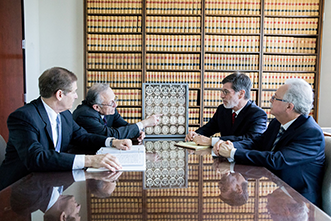 
This page contains samples of successful medical malpractice claims that resulted in recovery of money for our clients who were injured or who lost loved ones because of negligent medical treatment.

Amputation: $1.4 million jury verdict. A vascular blockage (blood clots) causing pain in a woman's leg was misdiagnosed as a sprain. The delay in proper treatment resulted in an above-the-knee amputation.

Appendectomy: A man suffered internal injury from infection caused by a delay in performing an appendectomy.

Arm Injury: Baby's arm was permanently disabled when the OB put too much pressure on her neck during delivery.

Death: The 11-pound baby should have been delivered by C-section. Instead, when the OB attempted to deliver him vaginally, his shoulder got stuck and the OB did not know how to complete the delivery. The baby suffered brain injury from lack of oxygen and died a few days later.

Cancer: Pediatrician misdiagnosed a lump on a 10-year-old girl's rib resulting in spread of cancer.

Dental: Dentist knocked out front tooth while trying to remove a lower crown.

Diabetes: Improper treatment for diabetic neuropathy caused the death of a 48-year-old husband and father.

Elder Abuse: An elderly woman suffered a broken hip when she fell from an unsecured wheelchair in a nursing home.

Emergency Medicine: 63-year-old woman died from a heart attack one day after her chest pain was misdiagnosed in the E.R. as a muscle strain and she was sent home.

Emergency Room: A woman lost consciousness after waiting for three hours in the emergency room for evaluation of a head injury. The delay in treatment of a ruptured blood vessel in her brain resulted in her death.

Foot Surgery: Patient needed a bone spur removed from the bottom of his left foot, but the surgeon made an incision in his right foot.

Gynecology: A tubal ligation for sterilization was negligently performed, resulting in an unplanned pregnancy and the future expense of raising a child.

HMO Bad Faith: Over $300,000 was awarded to a salesman who needlessly suffered when his HMO refused to authorize a $10,000 throat surgery to cure his sleep disorder which caused him to lose his job.

Hysterectomy: A woman underwent an unnecessary radical hysterectomy which injured her bladder and bowel because the gynecologic surgeon did not perform appropriate pre-operative tests and diagnostic protocols.

Infectious Diseases: An 11-year-old girl with a severe sore throat died shortly after the doctor sent her home with a prescription for antibiotics. The doctor failed to recognize the classic signs of epiglottitis, a life-threatening condition that caused her throat to close, blocking the airway and resulting in suffocation.

Informed Consent: Patient was not told that drug infusion treatment was experimental and not approved by the FDA. He died from complications.

Kidney Disease: A well-known photographer's kidney disease was not diagnosed and treated, resulting in her untimely death.

Leg Fracture: A construction supervisor couldn't return to work because his broken leg healed in a crooked position after the orthopedic surgeon did not properly align the bones.

Liver Disease: A newborn's liver disease was not diagnosed by the pediatrician, resulting in death at six-months of age.

Neurology: A 64-year old nurse died from the effects of a stroke because she did not receive proper treatment in the hospital.

Nursing: 83-year-old woman fell out of her hospital bed and broke her hip because the nurse failed to raise the bed rails.

Pediatrics: A one-month-old baby with a serious respiratory infection died because the doctor told her parents that she just had a cold.

Plastic Surgery: A young woman suffered a facial nerve injury when a cyst was improperly removed.

Psychiatry: A woman who was heavily medicated during a psychiatric hospitalization suffered a broken hip requiring two surgeries and a total hip replacement.

Prescriptions: A man suffered brain damage from a drug reaction because his doctor ignored the warning on his medical chart that he was allergic to penicillin.

Pulmonology (lungs): Patient suffering from shortness of breath died of clot in his lungs because HMO clinic delayed ambulance transfer to hospital.

Surgery: Patient's bladder was punctured during surgery to remove her uterus.

Sponge Left During Surgery: The surgeon and nurses accidently left a surgical sponge in the patient's abdomen after a hysterectomy. It was surgically removed years later after causing complications.

Stroke: A business executive suffered a disabling stroke while in the hospital because the doctors and nurses failed to recognize the symptoms of bleeding into the brain.

Weight Loss Surgery: An overweight woman who had stomach-reduction surgery suffered weeks of hospitalization and horrible scars because of the failure to correctly treat post-surgical infection and healing problems.